The American Theatre Organ Society Awards Committee announced its 2020 Awards of Distinction Winners. These awards would have been announced at the closing banquet of our annual convention in Indianapolis, IN, July 2020, but due to the novel Coronavirus pandemic, the convention has been postponed until 2021. It made no sense to postpone the awards, so these deserving recipients will be officially recognized at the annual members meeting, to be held Saturday, October 24 at.12:00pm EST. via Zoom. All current members are welcome to attend. Log in information will be published soon.

The Hall of Fame award is “presented annually to persons who have been loyal supporters of the American Theatre Organ Society. Throughout their lifetime, these individuals have shown dedication to the preservation of the theatre organ, and their contributions over the years have enhanced the public interest in the theatre organ.” The winners, selected from member nominations, are truly deserving of this honor.

Robert ‘Bob’ Dilworth
Robert Dilworth, affectionately known as ‘Bob’, has championed and been instrumental in creating the Dickenson dual-console theatre organ housed in Dickenson High School in Wilmington, Delaware. From procuring the Philadelphia Boyd Theatre Kimball (3-19, opus 7050), engaging volunteers and other skilled technicians to not only remove it from the theatre, but to install, regulate, voice, and enlarge it to 66 ranks, has been a decades long undertaking. Creating the Dickenson Theatre Organ Society to be the caretakers of this monumental undertaking, Bob has assembled a top-notch team to provide over 275 concerts over a 50-year span, delighting thousands of patrons from across the world. Although he has officially “retired” from running the Dickenson Theatre Organ Society, his presence and influence will be felt by generations to come.

Father Gus Franklin, S.s.c. (1938-2020)
Father Gus served as ATOS Vice President from 2000 – 2003 and as President and Chairman of the Board of Directors from 2003 – 2006. He also served as Chair of the ATOS Endowment Fund and Trustee from 2000 – 2003. Father Gus served as Young Theatre Organist Competition judge for several years. He founded the Central Illinois ATOS Chapter and served as its President until his health failed. Ordained an Episcopal priest in 1967, Fr. Gus served in many Dioceses including Springfield and Quincy, IL as well as a Rector in Peoria. His service to the religious, collegiate, and theatre organ communities was monumental. A frequent fixture at annual conventions long after serving in an official position nationally, Fr. Gus continued to serve until he was no longer able. He passed May 3, 2020 with the knowledge he had received the ATOS Hall of Fame Award.

Kenneth J. Crome (1947 -2020)
Master woodworker, technician, restorer, engineer, organ parts supplier, and beloved organ builder Ken Crome, whose life has been more fully detailed in the September/October 2020 edition of Theatre Organ, left a great chasm when he departed this world May 1, 2020. It would be difficult to find a corner of the theatre organ world that Ken didn't touch, from the original installation in the Jasper Sanfilippo home, to the recent acclaimed installation of the original Fox Studio Wurlitzer in the Bandrika studio of Nathan Barr. His stellar craftsmanship is seen in the numerous consoles he constructed or rebuilt, and the many installations that benefited from his immense knowledge and skill.
Having received the Award for Technical Excellence in 1983 and the Award for Industry Achievement in 2017, Kenny’s work has not only touched the entire theatre organ world, but he has set the bar for attention to detail and mechanical excellence. He will be missed, but his work lives on.

Charlie Balogh (1951 – 2019)
Charles Robert Balogh, Jr. was originally from Trenton, New Jersey. His interest in music began at age 11, at which time he started organ instruction. He studied with various teachers and eventually attended Trenton State College where he immersed himself in classical studies with Albert Ludecke, while performing in supper clubs throughout the area. For a short time, he studied with Lee Erwin in New York.
From those beginnings, he has emerged as an exciting and dynamic performer at the theatre pipe organ. Under the guidance of Lyn Larsen, Charlie worked as a staff organist at Organ Stop Pizza in Phoenix, Arizona from 1973 until 1976. In 1977 he moved to Grand Rapids, Michigan to become organist at the Roaring 20's restaurant. In 1986 Charlie and his family purchased the business, which was renamed Good Time Charley's.
After closing Good Time Charley's, Balogh decided to move back to Arizona to play for Organ Stop Pizza, this time in Mesa, at their new restaurant featuring one of the largest Wurlitzer theatre organs in the world. He recorded a number of albums on this fabulous instrument that have won the praise of reviewers for being innovative and setting new standards of performance and repertoire. He also created detailed MIDI arrangements which he incorporated into his nightly performances. His untimely passing in 2019 has been felt by the Organ Stop family and the theatre organ world.

Dave Moreno
A fixture in the Bay area of California, Dave Moreno has distinguished himself as a technician, performer, promotor, and musician for countless organs. Thomas LaFluer writes, “Dave Moreno has spent his life from 13 years of age devoted to the preservation, promotion and enjoyment of theatre organs of all types. I came to know Dave in 2012 as he aided our City Manager in locating the 1928 3/10 Robert Morton build for Pittsburg's California Theatre and sold through a number of hands but now acquired and reinstalled in it's original home; thanks to Dave's efforts and expertise. Working with Dave on the installation at Pittsburg's California Theatre has allowed me to get to know Dave and a number of other wonderful people devoted to theatre organs well over the last 8 years. “Our Rio Vista Wurlitzer installation is only one of several Uniflex systems Dave has installed and maintained,” says Geoff Hansen. “Almost every Northern California theater pipe organ has Dave as technician.” Thank you, Dave, for your hard work.

Steve Worthington
Steve has made ATOS Radio a fixture for not only our membership, but also the entire world. The funding for this endeavor comes directly from Steve’s own pocket. He continues to maintain the music library and clean up analog recordings for digital internet broadcast. Through the diligent work of Steve Worthington, Alexa now understands how to play Theatre Organ Radio without going through a third party, like Tune-In radio. It is high time he is recognized for his effort.

Bill Tandy (1955 – 2019)
Bill was a renowned co-host of the Male Call radio show on WWKI 100.5 and was loved by many. Bill's passion for music brought him to Kokomo from Chicago in 1982, and he was a gifted organist at the Pipe Dream in downtown Kokomo during the 80's. He was a member of many associations including Mensa, American Theater Organ Society, and the Amateur Organ Association Inc. Bill loved his family, music, classic cars, animals, classic films and television, and playing the organ. He played occasionally at the Pickwick Theatre in Park Ridge Illinois which was his home as a youngster. A fixture throughout Indiana, Bill also performed at the Hinsdale Theatre, Grand Ledge Opera House, as well as the Chicago theatre organ chapters. His sister Martha Malnor has graciously consented to accepting the award on his behalf at our annual member’s meeting.

Organist of the Year

Justin LaVoie
This award is presented annually to an outstanding organist who is currently active in the theatre organ art form through live performances and recordings. Recipients must have been publicly active for five or more years in the theatre organ field. Justin, who began his theatre organ fascination at 7 after hearing his first theatre organ, has propelled his career to include being named ATOS Student of the Year in 2010, winning the ATOS Young Theatre Organists Competition at 18 in 2013, studying with Jelani Eddington, and performing at several conventions and other premier theatre organ installations nationwide. He continues to bring an enthusiasm and love for the theatre organ that audiences enjoy. Justin also owns the Wurlitzer from the former Punch and Judy Theatre in Grosse Point, MI and is in the process of restoring it.

All of these awards will be formally presented at the annual members meeting which will take place via Zoom Saturday, October 24 at 12:00pm EST. Additional links will be emailed to all current members. 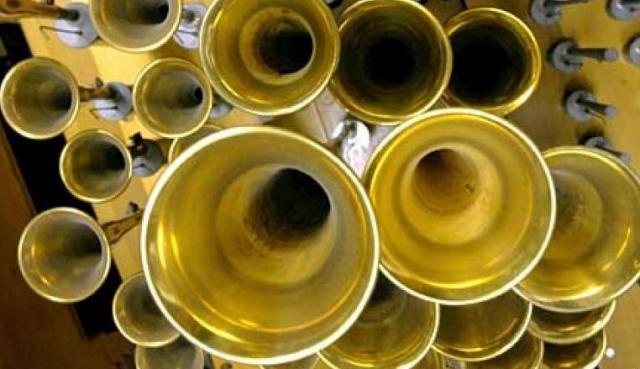