David Gray was born in Glasgow, Scotland in 1990 and first showed an interest in music at the age of four. He first taught himself how to play the piano by ear, and his first lessons followed a year later. At the age of 13 he began attending St Mary’s specialist music school in Edinburgh with a principal focus on piano, but also started studying classical organ in St Mary’s Episcopal cathedral with Simon Nieminski. It was around this time he had his first encounter with theatre organ, and the first instrument he ever played was a 3/8 Compton organ in Glasgow. With the help of Duncan Sinclair from the Scottish Cinema Organ Society he began to learn to play the instrument, and in 2005 won the ATOS Young Theatre Organist of the Year competition. This led to great acclaim internationally for his skills as a theatre organist. He has made many appearances in the UK, and was the recipient of the Ian Sutherland Award from the Cinema Organ Society and the Dean Herrick Memorial Cup from the ATOS London chapter. Towards the end of his high school studies, he chose to stop playing and studying classical organ as there simply was not enough time to do everything. However, he kept the theatre organ going as it is just too much fun and enjoyment to ever let go of! Since 2008 David has been studying piano on an undergraduate programme, with a full scholarship to the Royal Academy of Music in London. His teacher is renowned pianist Hamish Milne. In time between lessons and exams he remains as active as possible on the theatre organ scene. from ATOS Atlanta 2013 Conference website 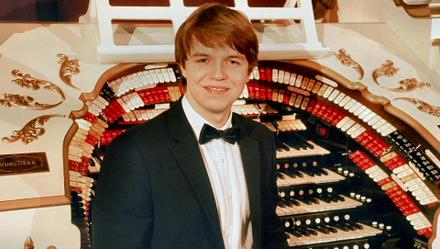