Autobiography
I am a native Southern Californian. My family lived for several years in the Palm Springs area, vacating those digs for the Los Angeles house during the summer. When I was about 11 we moved to La Canada/Flintridge where my parents bought a Hammond M3 and gave me lessons. 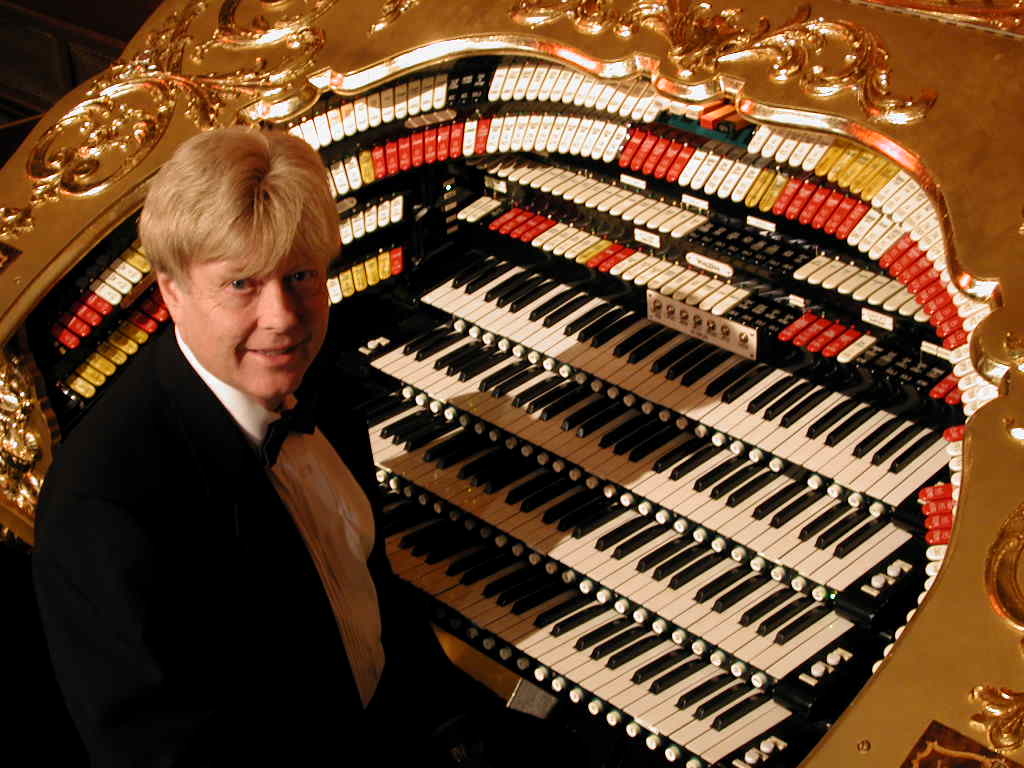 After just a few months they upgraded to a B3 and I started taking lessons from Orville Foster. Following a year or two with Orville I moved on to Gertrude Deutsch in La Canada. She was a former organist at some theatre in San Francisco and also a solo pianist on the NBC Red and Blue networks before they became NBC and ABC.

One day we happened to visit the Crome Organ Company in Los Angeles, My dad and I were absolutely enthralled with a small Style D he had set up in his shop. My dad searched around and found a 3/12 Wurlitzer and that started my formal introduction with the theatre organ. We had the organ professionally installed by an old theatre organ guy named Buster Rositer. I was just a young kid at the time but remember that Buster could do a 5-minute swearing tirade over a broken screw…a really colorful guy.

I majored in organ at SCUN and UCLA with a minor in mathematics and theatre arts plus getting my teaching credential. Graduating from college at 20, I did a 4-month tour with the USO entertaining troops in Alaska and Asia. Fascinating trip, we even made it to Iwo Jima Island…too bad I was so young as it didn’t have the impact it might have. Following that experience and returning to UCLA to get my masters degree I started teaching in the Thousand Oaks, California area and at the same time started building my Agoura home to house the pipe organ…enlarged from the original 12 ranks to 26 ranks and an absolutely gorgeous Balaban console. Burned the first house down a couple of years after building it in one of California’s infamous brush fires (200+ homes burned in that one…all the way to the Pacific Ocean in Malibu).

Rebuilt the house, reinstalled the organ just to not like how it turned out, reinstalled and enlarged it to its ultimate specification of 4 manuals 52 ranks and purchased a new Fox Special French styled console from Ken Crome. Once installed, the organ went through zero changes, I was quite happy with the tonal resources and acoustic environment…especially after a second fire (chimney fire that wiped out the ornate Victorian fireplace while hosting a family Christmas party…didn’t even know it was burning until the fire department showed up!) in December 2002 caused the carpet to be torn out and hardwood flooring put in. The instrument was regularly used by several Hollywood motion picture companies to augment the sound tracks for many motion pictures. I produced six CDs on the instrument before I donated the organ to the Nethercutt Collection in 2007 but they did not intend to use it and it was ultimately sold and parted out...with me buying back all the percussions and traps for my new installation in Henderson

I have concertized in Europe, the US and Australia. Was a regular on the Mike Douglas TV show for a while.

For years I taught (mathematics and theatre arts) and did a small amount of concertizing when people asked me to. Somewhere in all those years I managed to be program chair and president of the Los Angeles Theatre Organ Society, chaired the 1979 American Theatre Organ Society's National Convention in Los Angeles which included the longest charter Amtrak train at the time (over 1100 people…13 cars I think...it was too long to fit the platforms at the Los Angeles main station), served several terms as an ATOS board member (I am currently on the ATOS board) and three years as ATOS President. For a short period I taught a college level theatre organ class at Pasadena City College. The class grew quite large, enough for two sessions, but due to other commitments, I gave my resignation after a year and a half and they tried to find a replacement but the class was ultimately discontinued in part because the students were “too old” according to the department chair. I gave up teaching in 2000 after trying for a year to juggle teaching and my commitments at the El Capitan Theatre. Switched in favor of the Disney gig…and I really think we have the best theatre organ job in the country…if not the world. I have been on staff there since 1999.

I moved to Henderson, Nevada, just south of Las Vegas in 2007 and am in the process of installing a 3 manual 13 rank Wurlitzer in my home.

It is my passion that we must play music that is newer than 70 to 80 years old if we wish to attract people to the theatre organ. I present a program from a more contemporary period of music in an orchestral style. My current program includes film music by John Williams, Broadway music by Bernstein and Lloyd Webber, plus others, an early Rock 'n Roll medley featuring music by The Beach Boys and many other period musical selections, a group of pieces I call Music for a Full Moon that is really music that has some connection with sinister or creepy films, a transcription of Orpheus in the Underworld Overture plus an emphasis on music from Disney productions. This coming season I will be adding additional film music from the Magnificent Seven, Silverado and How the West Was Won plus music from the 70s and 80s...there is a surprisingly large amount of well-known music from this period.

Presently I do 5 to 10 concerts a year in various locations across the country and in foreign countries which helps keep the food bowl full for my two kitties, Aida and Athena.