Lance Luce is an internationally acclaimed theatre organist. He has played hundreds of concerts all over the United States, Canada, England and Australia. His concerts are praised for appealing to audiences of all ages, containing a wide variety of musical styles. At age 18, Lance won first-place honors in the Yamaha National Electone organ competition in California. The next year he was appointed the Head Staff Organist at Radio City Music Hall in New York, on the largest Wurlitzer ever built. 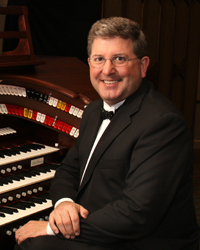 Luce has made many recordings, including being part of the famous"Theatre Organ Greats – A Salute to Radio City Music Hall" double LP.

For many years, Lance was the "Featured Entertainment" at the console of a theatre organ at several "Pizza Parlor" style restaurants. Two in Michigan, and the highly successful "Organ Grinder Restaurant" in Toronto Canada, where he played for eight years.

Lance began playing the theatre pipe organ at age 10 at the Royal Oak Theatre near his Michigan home. By age 13 he was playing at that same theatre for intermissions. During his teenage years he began playing the organ at a local church on Sundays, and three nights a week at a local skating rink; he performed countless times for area organ clubs and societies. Lance has been a church organ consultant in Michigan since 1991.  He is the church organ consultant for Allen Organs and Reuter Pipe organs for Evola Music.  Lance has designed and installed more than 200 organs in churches, homes and institutions.  His background includes pipe organ repair and building, as well as electronic organ design, installation, voicing and pipe interfacing.

Lance is on the staff at the Detroit Fox Theatre, and is one of the organists at the Redford Theatre in Detroit, Mich. He continues to be a church organist, recording artist and maintains a busy concert schedule.