Melissa began organ studies at the young age of thirteen. At age fourteen, she performed her first concert at the Michigan Theatre in Ann Arbor. Since then, she has performed on several notable theatre organs such as the Flint Institute of Music, Fox Theatre (Detroit), Redford Theatre (Detroit), Temple Theatre (Saginaw), and many more.

At age fifteen, Melissa won the state of Michigan Yamaha competition and the U.S. Regional Yamaha competition. She received the Royal Oak Musicale Merit Award for outstanding musicianship in the community. In 1995 she competed in the Young Theatre Organist Competition internationally and was runner-up. She competed again in 1996 and won a college scholarship. Competing again in 1987, she won the Young Theatre Organist competition and was a featured performer at the American Theatre Organ Society’s convention in Los Angeles on the Orpheum Theatre’s Wurlitzer organ. She also was featured at the society’s regional convention in Denver that same year.

After winning, Melissa went on to perform at other great theatre organs in Toledo, Columbus and
Mansfield, Ohio. She also performed in Pittsburgh, Pennsylvania, Lockport and North Tonawanda, New York, Torotno, Canada, and Chicago, Illinois.

Melissa has been the Minister of Music at the First Congregational Church of Royal Oak since 1993.

Melissa’s love of music also has her teaching music to kindergarten through eighth graders at St. Vincent Ferrier Catholic Schools since 1991. She also gives private piano and organ lessons to twenty students weekly. 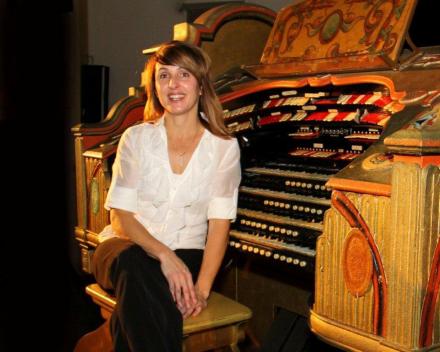