Walter Strony is one of America's premier concert organists. He made his public debut in 1974 at the age of 18 and has since established himself as one of few organists equally at home playing both theatre and classical organ.

Mr. Strony has performed hundreds of concerts from coast to coast in the United States as well as in Japan, Australia, England, and Canada. In addition, he has performed at many conventions of the American Theatre Organ Society and the American Guild of Organists.

In July 2007 he performed the first solo organ recital to be presented in many years at New York's Radio City Music Hall -- for the American Theatre Organ Society's 2007 Convention.

He is the only living theatre organist to have been twice voted "Organist of the Year" by the American Theatre Organ Society - in 1991 and 1993. He has performed with the Calgary Symphony (1999); Allentown Symphony (2003); and most recently with the El Paso Symphony (2007).

In addition to his fine reputation as a concert organist, Mr. Strony is well known for his many recordings. His first CD “Phoenix” was rated 10/10 by CD Review -- the highest rating given by this prestigious publication. He has recorded over 30 albums with his most recent CD (2007) being recorded on the world's largest theatre organ at the Sanfilippo Music Room in Barrington, IL.

As an author, he is well known for his book "The Secrets Of Theatre Organ Registration", which has become the standard reference book on this subject.

In addition to being one of America's most sought after concert organists, his services as a pipe and digital organ consultant-tonal finisher are in great demand. His work in this area has taken him to both theatre and classical instruments across the country and around the world. He was consultant for the fourth largest theatre pipe organ in the world - the 4/60 Wurlitzer in the Aveni Music Room in Gates Mills, Ohio.

Walter Strony was born in Chicago in 1955, and began music lessons at the age of seven. His theatre organ teacher was the famous Chicago organist Al Melgard, who for many years was the Staff Organist at the Chicago Stadium. His classical studies were with Herbert L. White and Karel Paukert.

After living in the Phoenix area for 22 years, Mr. Strony relocated to Las Vegas, Nevada in 1999. He performed at Roxy's Pipe Organ Pizzeria in the Fiesta Casino, Las Vegas during its entire run, and is currently Artist-in-Residence at First Christian Church, Las Vegas.

In his spare time, he works on the restoration of his mid-century Las Vegas home and enjoys traveling, fine dining, and collecting Art Deco items.

This well-rounded musician brings a wealth of experience to any organ console. This experience has brought him the reputation of being one of America's most original and interesting sounding concert organists. As one reviewer noted - "Strony has become one of the rare breed of today's younger theatre organists to have developed a style uniquely his own. While looking backwards, respectfully to the masters of the theatre organ tradition, he manages to look forward with a refreshing approach in all his musical arrangements. It is a style that is inventive, harmonically interesting, and above all, right for today." 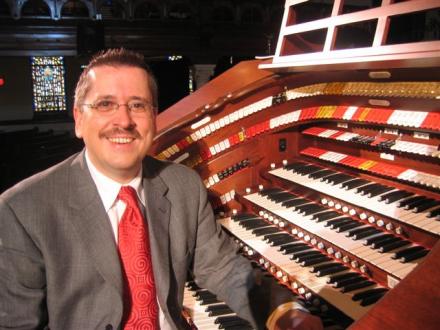