Tony Thomas is a nationally known pianist/organist/keyboardist, currently based in Memphis. Although Tony earned a Bachelor of Music Degree in Organ Performance under Gerhard Krapf at the University of Iowa in 1968, he is known best as a jazz artist.

Improvisation is his forte.  A love of the theatre organ came early in his musical life when, at age 8, he heard his first recordings of George Wright.  Not long after that, Tony was fortunate to see and hear the Count Basie Orchestra perform in person, and even “sat in” with the band’s rhythm section at rehearsal.  From that moment on, he was “hooked” on swing.  By age fourteen he was performing regularly on a 3/15 Barton in a local roller rink, and at age 15 became the youngest soloist ever to give a concert on the newly-installed 4/34 Wurlitzer at the Senate Theatre in Detroit.  Almost from his first acquaintance with the theatre organ, Tony was playing the instrument but hearing a big band in his musical ear!  His jazz influences are numerous, but probably Erroll Garner, Milt Buckner, George Shearing and Bill Evans have helped to shape his musical conception on theatre organ - even though Tony has spent a lot of time over the years in small jazz ensembles on Hammond B3, doing the “nitty-gritty” thing as well.

He is a five-time winner of the N.A.R.A.S. (the “Grammy People”) Premier Player Award for Keyboards and/or Piano and was inducted recently into that organization’s Premier Player Hall of Fame.  He has recorded literally thousands of commercial music tracks as well as cuts with Joe Walsh, U2, Jimi Jamison (lead singer of the band “Survivor”), and, in Spring, 2005, an album of Standards with internationally known Opera Star, Kallen Esperian.  Tony has performed with Al Jarreau, David Sanborn, Hank Crawford, and the late Richard “Groove” Holmes. 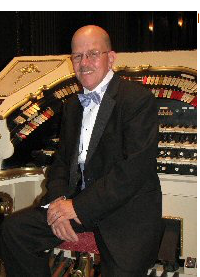