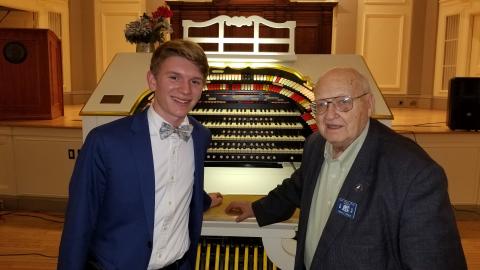 Wellesley, Massachusetts—Eastern Massachusetts chapter’s (EMCATOS) winter event, the Young Organist Concert, traditionally sponsored by member Charlie Briggs for the Wurlitzer at Babson College in Wellesley, Massachusetts, featured Brett Miller, a high school student from Pennsylvania. A member of the American Theatre Organ Society (ATOS) and Garden State Theatre Organ Society (GSTOS), Brett has been a finalist in the American Theatre Organ Society’s Young Organist competition and is already a veteran performer at the Wurlitzers in New Jersey venues such as the Rainbow Room in Rahway, the Brook Performing Arts Center in Bound Brook, and on the Landmark Loew’s Wonder Morton in Jersey City. Along the way, since the age of ten, his musical experience has included the ATOS Summer Youth Adventure, the Philadelphia Youth Orchestra as a pianist, his high school marching band as a keyboardist and percussionist, and substantial public service work involving music and film. He is currently a student with Jelani Eddington.

Thanks go to Brett for the thoughtful and engaging performance and to Charlie Briggs for arranging the event.