Dan Minervini was announced winner of the 2015 ATOS YOTC. He will receive over $2000 in cash prizes, as well as an opportunity to perform at the "Rising Star" concert at the Balboa Park Summer International Organ Festival in San Diego on July 20. He also received an invitation from Atlantic City Boardwalk Hall Municipal Organist Steven Ball to perform on that instrument.

Dan is a house organist at the 3/15 Austin-Morton at Chaminade High School in Mineola, New York, from which he graduated in 2011. He currently studies with renowned theatre organist Jelani Eddington and is part of the five-man crew maintaining and restoring the 4/26 Wurlitzer at the former Brooklyn Paramount Theatre.

In 2013 Dan was named “Organ Student of the Year" by the American Theatre Organ Society, and just completed a two-year term as "Youth Representative" to the ATOS Board of Directors.

Judges at the performance were Steven Ball, Mark Renwick, and John Baratta. Other performers included Ryan Hardy and Seamus Gethicker, both of whom earned outstanding praise from the three judges. They each received over $500 in cash awards. 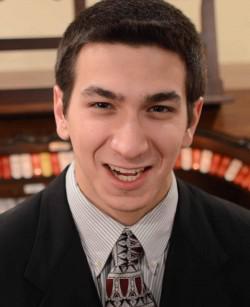