Finding Homes for the "Orphaned Organs"

Former ATOS Board Member, longtime ATOS member and supporter, and pipe organ owner John DeMajo recently wrote a post to the Theatre Organ-L chatroom.
It posed the serious issue of the growing number of instruments needing homes, and what ATOS is doing about this problem.

It was eight years ago, I was fairly new in the position with ATOS, and I was having a serious discussion with the late Garret Shanklin about this very subject. Shanklin, of course, installed the former Boston Metropolitan Wurlitzer in his spectacular Shanklin Music Hall.

As I suggested that ATOS was not truly in a position to become a repository for orphaned instruments, his comment was, “If not ATOS, just who is going to do this?”
That led to further discussion, at which point I suggested he write the first check, well into six figures, and we could begin planning such an operation.

ATOS is WELL AWARE of this issue. We have older members who back in the 50’s and 60’s saved treasured instruments from theatres, installed them in a basement, a bedroom, a garage, or if they had the means, created an addition on the house for a great music room to house their wonderful theatre organ.

Now, aging or a spouse deceased, what is to become of the organ? Can those people call ATOS for help?

Not just myself, but many others have received just such a call. And not only for the pipe organ, but for the Allen, Rodgers, Wurlitzer, Lowrey and anything with multiple keyboards and a pedalboard that was grandma’s and now needs a home.

I will state today what I told Garret Shanklin eight years ago. ATOS is not in any position to become a repository for theatre pipe organs. It COULD take on that responsibility in the following manner – one idea of many that might be a solution.

ATOS would first have to establish an East Coast, Midwest and West Coast storage location whereby instruments could be accepted and housed in weather-protected environments. There would have to be volunteers or perhaps staff to oversee these operations to house and inventory these instruments.

ATOS could then begin a program of outreach to hopefully find a chapter, school, church, community, theatre or other entity interested in acquiring a theatre pipe organ.

It is entirely possible for ATOS to begin such a program.

With one major caveat – the funding needed to do it. Which is why I suggested to Garret Shanklin that he might write the first check.

Rent for 12 months on three large buildings, plus upkeep and management, would run into the tens of thousands annually. And there are those within the ATOS community who could provide the dollars necessary if so moved, or if the program were detailed and offered.

But it would be nigh impossible today for ATOS to accept donations of instruments and then find new homes. That is simply not today’s reality.

Unlike the 1970’s when pizza parlors were springing up; collectors like Shanklin and Jasper Sanfilippo were aggressively seeking organs and parts; and the movement was alive to the point where one Brass Sax rank could command
$10-12,000 in value…today, the market is nil.

But one might ask, “What about OHS? Haven’t they done this for the church organ world?” To an extent, the answer is yes. And there are tens of thousands of churches out there, many happy to pay far less for a fine used instrument when the budget won’t allow for a brand new one. That comparison is “apples to oranges.”

Does ATOS totally ignore this issue? Not at all. I have personally been involved in several activities whereby chapters were actively seeking to find an instrument.
And I am currently involved in trying to locate homes for no fewer than four different instruments. And we have several examples: The Grand Theatre in Fitzgerald, GA; the Circle Theatre in Indianapolis; Whittier High School in LA; Santa Monica High School in LA; the Oklahoma State Museum and its new Kilgen organ; and many others, whereby instruments have indeed found new homes. And those success stories lie largely with local involvement leading the way.

ATOS as an organization does not have staffing tentacles that stretch across the country. It is, as currently organized, incapable of providing this function in and of itself. If that is the case, how does this get done?

The answer to that question lies at the very basic level of who and what ATOS is.
ATOS is the umbrella organization for a group of chapters. Who might be able to find out if a church congregation might be willing to have a theatre organ in their church? Who might find out if a school district is building a new school with an auditorium that might house a pipe organ? Who might know if wonderful old Aunt Millie has an organ that needs a new home? Who might know someone in community leadership whereby a new community theatre is on the drawing boards and might be willing to consider creating chamber space for a possible installation?

ATOS can’t be all things to all people in all places. It is our chapter members in their communities who can become the catalyst for finding out if these opportunities exist. And clearly, ATOS can assist. 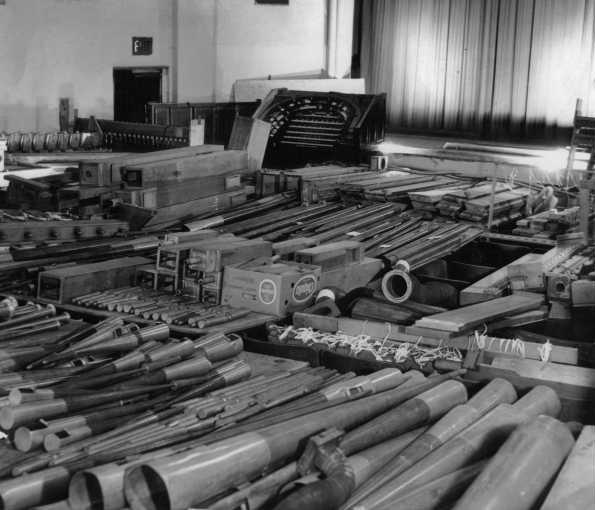