Michael is one of England’s busiest and most popular theatre and electronic organists, launching his career at the age of fifteen by winning the ATOS UK Young Theatre Organist of the Year Competition in 1980 (before the idea was taken over to the USA) and then receiving the coveted Ian Sutherland Memorial Award from the Cinema Organ Society of Great Britain in 1984.

He has regularly appeared on BBC Radio 2’s The Organist Entertains, and also broadcast the Virtual Theatre Pipe Organ live on air to 5-million listeners on the channel’s Steve Wright In The Afternoon Show. He plays concerts on all of the Mighty Cinema Organs around the UK, and is Resident Organist on Europe's largest Wurlitzer organ, the magnificent 4/32 East Sussex National Wurlitzer.

He has been privileged to deputise at the controls of the 5-manual Compton at the world famous Odeon Leicester Square for a couple of film premieres, one in the presence of His Royal Highness Prince Charles, and to appear in a sell-out concert at Bournemouth's Pavilion Theatre with the world renowned Mantovani Orchestra, now run by the great leader's son. Recent highlights have included leading a modern-day pop singalong for a family audience of 1,000 New Year's Eve revellers from the controls of the Worthing Wurlitzer and, at the same instrument, playing the organ part in the Saint-Saëns Organ Symphony with the Worthing Symphony Orchestra in an edited version to an enthusiastic audience of 700 children in a special inspirational morning schools' concert for 8 to 12 year olds, where the star of the show became the solo Wurlitzer feature, and the full version of the same piece to 850 concert goers that evening.

Outside of the UK, Michael has played theatre organ concerts in Holland, Germany, Switzerland and Australia and, in bands, has worked in Ireland and Dubai. He has worked as concert artiste playing pianos, organs and keyboards for Yamaha, Hammond and Wersi.

These days a rare talent, Michael has mastered the art of accompanying silent films and, besides sometimes slotting a comedy short into his concerts, in the summer of 2017 was Principal Accompanist for a Silent Film Festival, 'Vive La France!' held at Berlin's Babylon Cinema. He has played for other silent film events both in the UK and in Holland.

He very much enjoys leading small bands and orchestras, providing jazz nights and also playing in theatres, where he has produced and musically directed countless musicals, touring shows, summer seasons and pantomimes. Michael feels extremely privileged to have worked with many of the stars he grew up admiring on television.

Michael is also adept at the controls of the classical organ, where recent engagements have included accompanying a packed carol service on the superb 1914 four-manual Walker organ in the magnificent surroundings of Lancing Chapel, where the combination of this instrument coupled to the smaller Frobenius choir organ to accompany the massed choirs and 550 in the congregation gave a truly awesome sound. He also felt honoured to play for Christmas Day Mass on the three-manual Hill organ at Arundel Cathedral.

When not on tour Michael is pleased to share his experience and bring out the best in others through teaching. He is Principal Tutor to the Rye Wurlitzer Academy, teaching Rye College students on the UK's second oldest Wurlitzer, and the Theatre Pipe Organ Preservation Society Academy at Robertsbridge. He spent three years working as Electronic Organ Instructor to the University of Sussex and has a number of private pupils.

He was invited to became a Trustee of The London and South of England Chapter of the American Theatre Organ Society specifically to re-launch the UK Young Theatre Organist of the Year Competition in 2014, an event which he has given new life to with great success producing winners from Rye, Barrow-In-Furness, Hull and Glasgow, all helped to one degree or another by Michael and ATOS UK. 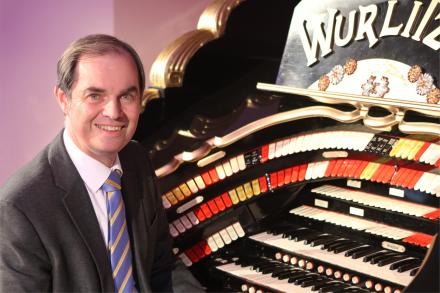