"From his self-created instrument to his self-created style, Misha brings a most refreshing approach
to the theatre organ that is both fascinating and entertaining."
—Ken Double, ATOS President.

Misha V. Stefanuk is available for theatre organ concerts, pre-shows and sing-alongs. He is serving as organist-in-residence at Winters Chapel United Methodist Church in Atlanta, Ga., and recently became a staff organist at the Strand Theatre in Marietta, Ga.
Stefanuk successfully combines entertaining and educational aspects of theatre organ concerts, attracting more people to the this great American instrument and ATOS. He also believes it is vitally important to incorporate contemporary music into more traditional theatre organ repertoire that we all know and love. Stefanuk's programs combine American popular music from 1920s to 2000s, light classics and occasionally original material. His style is a reflection of classical training combined with commercial music, including improvising which he has been perfecting as a performer and teacher for more than 25 years.

In 2009, Stefanuk became involved with virtual organs, particularly with the theatre organ, enormous instruments that once graced the movie theatre palaces of the 1920s with their appearance. He then built his own virtual theatre organ, a four-manual, 200-tab console featured in THEATRE ORGAN: Journal of the American Theatre Organ Society in 2011. This project was immediately followed by developing and constructing his touring virtual console completed in 2012, which is available for venues that have a powerful sound system, but lack a theatre organ.
Stefanuk, a successful TV composer, writer, church musician and teacher, regards being a theatre organist as one of the most exciting, enjoyable and fulfilling opportunities to make and share music. He hopes that theatre organ music will be represented on a larger scale in the 21st century, and that we all can find ways to preserve, maintain, perform and create more of these beautiful gigantic machines. In his own words he “would love to play any theatre organ anywhere anytime if possible, or will bring his own if there is none available!”
As a composer, Stefanuk has written more than 120 works for a variety of instrumentations, of which a significant amount is music for network television, including programs such as "All My Children" and "One Life to Live" (ABC), "Passions" (NBC), "The Chris Isaak Show" (Showtime), "Young and the Restless" and "First Monday" (CBS). As a Mel Bay best-selling author, a number of his works are Mel Bay Publications' best-sellers, including Jazz Piano Chords, Jazz Piano Scales and Jazz Piano for the Young Beginner, Jazz Piano Album, Step by Step, How to Improvise Classical Music on the Piano and Piano for Adults.
Stefanuk started playing piano at age 5 and composed his first piece when he was 9. Stefanuk graduated from Boston University, Belmont University and Moscow Conservatory School. Other studies included Moscow College of Improvised Music, the Russian Academy of Music and Skidmore Jazz Institute. Stefanuk is a prize-winner of the Stereotypes and Nations Composition Competition held by Muzica Centrum Art Society in Cracow, Poland, Concerto Aria Composition Competition at Belmont University and was also named Outstanding Piano Player at the l29th Annual Lionel Hampton Jazz Festival. Stefanuk has released more than 20 CDs varying from Contemporary Classical to Jazz, New Age and Popular. His first large-scale original organ composition (Organ Book I) was premiered at his senior recital at Belmont University's Massey Auditorium by the composer in 1995. This was followed by Organ Books II and III written on commission from New York organist Carson Cooman. About the same time Stefanuk landed his first organist position at a little church at Vanderbilt University, followed by a number of different organist positions, with 10 year residency at Winters Chapel UMC, Atlanta, Ga.
Stefanuk and his wife, Evan, teach more than 100 students at Johnson Ferry Conservatory of Music in Marietta, Ga. Among them are recording artists, TV personalities, winners of national and regional competitions, and teachers. Misha's students have attended a number of prestigious music schools in US, and abroad.
Misha V. Stefanuk
3820 East Carlyle Ct
Marietta, GA 30062
Phone: 678-520-0749
Email: misha [at] stefanuk.com
Website: www.stefanuk.com 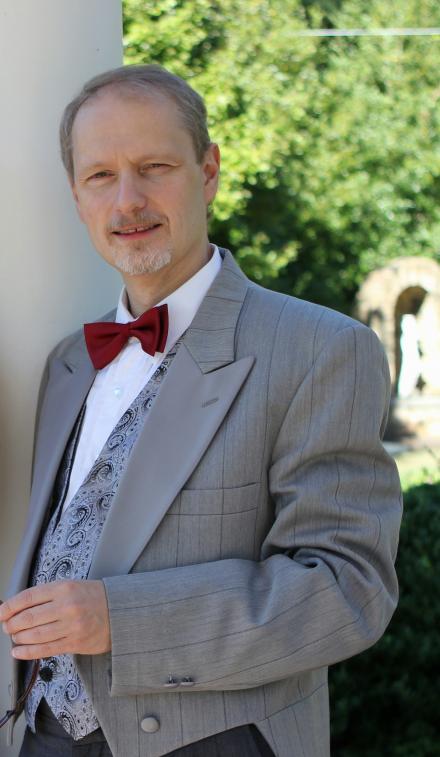