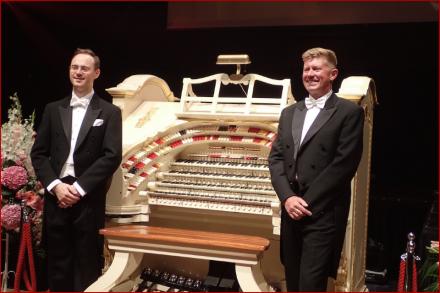 BLOGGING ABOUT ONE OF THE GREATEST WEEKS
IN THE MODERN HISTORY OF THEATRE ORGAN CONCERTS!

What do London, England, St. Louis, Missouri and Auckland, New Zealand have in common? Singularly great theatre organ concerts, with huge audiences, putting the spotlight squarely on the instrument we love.

On Saturday night, August 22nd, our friends in the Cinema Organ Society unveiled the famous Trocadero Wurlitzer organ in its new home in Stepney, east London – The Troxy. Richard Hills and Robert Wolfe provided the entertainment to a sold-out house, enthralled by the grand sounds of the largest Wurlitzer the company shipped to England.

After five years of labor, fundraising that generated nearly $300,000, and with the benefit of tremendous media coverage, this concert was sensational. What splendid way to introduce this great organ in its new home.

The next day, and thousands of miles to the west, Jack Moelmann once again played impresario. As he did at Radio City Music Hall, Jack rented the massive St. Louis Fox Theatre, hired Walt Strony and Lew Williams to join him, and staged a three-hour extravaganza of music, silent film, sing-a-long, and flag-waving as only Jack knows how to do.

Wonder of wonders, they had to hold the show so the crowd lined up around the block could get in and not miss a note. Some 2,000 were in attendance!!!

The concert was in part a tribute to the great Stan Kann, the master entertainer who held court at the Fox for years. Kudos to Al Haker and crew for getting the 4/36 1928 Wurlitzer through the event without the first miscue.

Now fast forward one week, and travel farther to the west – as in half way around the world – and we come to Auckland, New Zealand and the Hollywood Theatre. The Wurlitzer Organ Trust, headed up by James Duncan, has staged concerts at the Hollywood Theatre for some 30 years. In the late 90’s a serious undertaking found the instrument enlarged to 3 manuals and 16 ranks, providing a glorious sound in the neighborhood theatre.

Duncan and crew have worked very hard over the years to generate a growing, steady audience for the concerts, but just recently learned the theatre would be sold, and more than likely, the organ would have to be removed.

This coming weekend, with Jelani Eddington in concert, will most likely be the final theatre organ concerts at the Hollywood Theatre. As the story got out and the media took hold, the concert quickly sold out, thus a second show was added. It is nearly sold out.

This is vital in that the price tag for proper removal and anticipated storage of the organ could exceed $50,000. The Trust is seeking donations from every corner of the theatre organ world, and from government and philanthropic agencies in New Zealand. Our friends at TOSA, the Theatre Organ Society of Australia (who just celebrated the 50th anniversary of THAT great organization!), have pledged their support both in dollars and in labor.

Negotiations on every front are ongoing, but an anticipated deadline of September 30th for removal of the organ makes this situation beyond urgent.

Can the Trust executives find a new home? Will the organ need long-range storage?
Might the fast-approaching deadline be extended by new owners of the theatre?

All of this and more is still hanging in the balance, like a silent-movie melodrama awaiting the hero’s entrance to save the day! We wish James Duncan and all a grand piece of good fortune soon, and a great success this coming weekend.

And we congratulate all at COS in Great Britain for their spectacular debut of the Troxy Wurlitzer, and Jack Moelmann and friends for the tremendous success enjoyed at the St. Louis Fox.

Indeed…what a week for the instrument and the music we love!

I’ll update on the Hollywood situation when news becomes available, and will have more for you soon!