About Claparède (translated from the French on their website by Google)

ASSOCIATION "FRIENDS OF THE ORGAN OF CINEMA COLLEGE CLAPARÈDE" was created in November 2012 in order to develop an exceptional instrument lying in the Aula of Claparède college, cinema organ the "Wurlitzer" .

The association was created at the instigation of Mr. Nicolas Hafner, organist and Madeleine Rousset Grenon, Director of Claparède college. This instrument, made in the USA in 1937, was originally installed in a cinema chain "Granada" in Clapham Junction, in the suburbs of London.

In 1980, during the restoration of this film, a Geneva Association, in agreement with the State of Geneva, acquired the organ and his ghost-piano, during an auction. It was decided to settle permanently in the Aula of Claparède college. It is therefore the property of the State of Geneva.

Our newly created association has decided to contact institutions, foundations and private donors to raise money to fund a complete renovation. The work, entrusted to Mr. Alain Ott of the Manufacture of the Great Organs of Geneva, brought significant results, to ensure high reliability of the instrument, restore the failing functions and better document the general operation of this organ.

Our current goal is to group around this historic instrument the most possible members wishing to join our association. Revenues generated annually will be needed to support the annual costs associated with maintenance and regular tuning.

We therefore appeal for your cooperation: Become a member of our association by paying your annual fee.

Finally, we would love to benefit from your various skills. Join our team and offer your time and talents to our many exciting projects.

Building by the Wurlitzer Company in the U.S.A. in 1938, it was installed in the Granada theater Clapham Junction, London (UK). Dismantled in 1980 and reinstalled in Claparède in 1982 by Bernard Dargassies (Boulogne, France). Piano restored by Van Beeck (St-Martin, NE).

(translated from French by Google with minor editing) 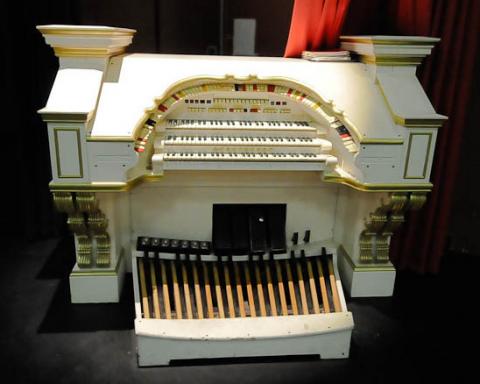