The Kotzschmar Organ was a gift to the City of Portland, Maine, by publishing magnate Cyrus Curtis. Built by the Austin Organ Company of Hartford, Connecticut, it was the second largest organ in the world when it was installed in Portland City Hall Auditorium in 1912.

The original organ of 1912 was enlarged in 1927 by the Austin Organ Company and funded again by Cyrus H. K. Curtis. At this time the Antiphonal Organ was added, as well as a large number of ranks to the Swell division and a number of percussion stops.

During a massive renovation project of the auditorium in the 1990’s, a new and enlarged wind chest was constructed, making possible the reinstallation of a 32′ Magnaton and a 32′ Bombard, both lost to damage or lack of room during the auditorium’s 1968 renovation.

The most recent addition to the organ took place in October of 2000, when Austin Organs, Inc. installed a new, custom-designed 5-manual console. This state-of-the art console was made possible by major gifts from Anita and Charles Stickney, Sally and Malcolm White, a grant from the Theodore Presser Foundation, as well as other individual donors. 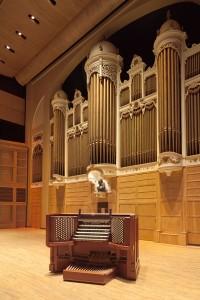