The Adrian Phillips Ballroom at Boardwalk Hall in Atlantic City is equipped with a magnificent pipe organ, installed in two chambers behind the grill-work on either side of the proscenium. The console is located in the musician’s balcony (house right). The Ballroom is a venue of gigantic size, 181 feet long, 128 feet wide, and 75 feet high. It seats 5,000 people (including the rear balcony).
Installed in 1930, the instrument is playable again, after having been silent since the late 1990’s. About $250,000 has been spent on restoring the organ, which has suffered from years of neglect and mistreatment. Much of the damage took place while Boardwalk Hall was undergoing a $90 million restoration project in 2000 and 2001 that turned it into the concert and sports arena it is today. Among the organ improvements: the console has been totally refurbished, a modern electronic relay installed, and the blower restored. 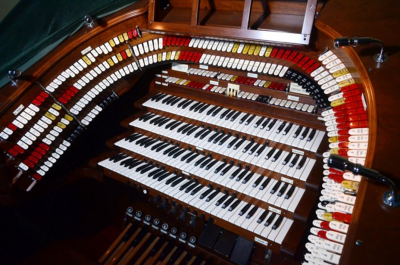