The Town Hall in Ossett, Yorkshire was one of the first Town Hall installations in the UK, having been started in 1964. The Compton-Christie organ was built up from parts which were added to the five unit Compton from the Rialto cinema in Bebington. The piston relays and setter boards are from the Odeon, Swiss Cottage and Regal, St Leonards, the shutters are from the Fitton & Haley cinema organ in the Greengates Cinema Bradford.

The console is from the New Victoria, London (being the only Compton console with three sweeps of stop-keys) and the platform on which it sits is from the Plaza, Chorley. The whole thing was put together by a team led by Frank Hare and Reg Mander and completed and officially opened on 4th January 1970 with Watson Holmes and Hubert Selby at the console. The concert was recorded and broadcast on BBC Radio 2's 'The Organist Entertains'. 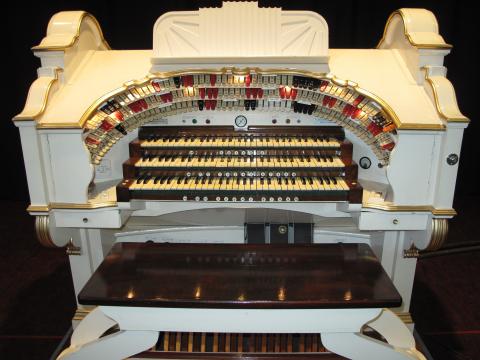