The Riverside Theatre opened as an original Orpheum circuit house on April 29, 1928, with seven Vaudeville acts and a film titled “The Big Noise.” The theatre, designed by architects Kirchoff and Rose, is of modified French style and is part of a 12-story downtown office building known as the Empire Building. Located on the west bank of the Milwaukee River, it quickly became the showplace of Milwaukee, with 2,500 seats and excellent acoustics. It continued through the 1940s as a performance venue with big bands, featured entertainers and movies, and through the 1950s as a first-run movie house. The organ was regularly used into the 1950s.

The Dairyland Theatre Organ Society began restoration of the organ in 1980, repairing much water damage from a leaky roof, and ordinary wear and tear. The theatre, which was also in poor condition and showing “Kung Fu” films to audiences of mere handfuls, went dark on Labor Day of 1982. The halcyon days of downtown being the movie center had changed with the advent of suburban and shopping center theatres. The owners of the building of which the theatre is an integral part decided to refurbish the Riverside in 1983 and return it to a live performance house which reopened on November 2, 1984. The theatre donated the organ to the Dairyland Theatre Organ Society.

The Riverside 3/14 Wurlitzer is the original Style 240, Opus 1865, installed for the theatre’s opening in 1928. Originally 13 ranks, a Trivo Post Horn and 16’ Tibia were added. Its specification was also modified to increase the unification, and the original Wurlitzer relay from the Sheboygan Theatre was added to the instrument. 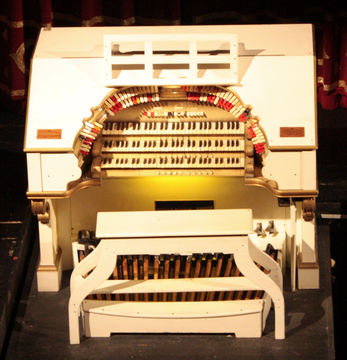