Finding the Sunshine in September 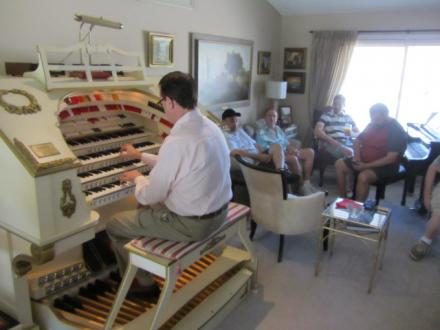 PRESIDENT'S UPDATE
The month of September will be bookended (if I might use that term) by trips to the sunshine.

First, there was an excellent journey into Southern California that began with a meeting with Mark Herman in Los Angeles for very preliminary discussions on the 2018 convention plans; the great news that the 5-manual Möller at the Pasadena Civic Auditorium is garnering some very positive attention; and included a visit with the current and former “bosses” of all things theatre organ at the Nethercutt Collection, Kyle Irwin and Gordon Belt.

There was also a wonderful visit with Dr. Bill Worden who has been a strong supporter of the International Youth Silent Film Festival. Always fun to play Dr. Bill’s wonderful Allen GW 4.

I also took advantage of the geography and visited with ATOS’rs Peter Crotty (now a member of the Endowment Fund Board of Trustees) and Larry Grundy, great supporter of the Summer Youth Adventure.

The trip concluded with stops in the desert—where a number of ATOS members are now calling the Palm Springs area home, and they have added digital theatre organs to the surroundings. I had the chance to visit and play Larry Chew’s 3-manual Allen LLQ; and David Quinn’s highly decorated GW 4 (see photos).

Both visits were fun. The organs sound excellent. And along with Jack Gustafson’s delightful residence pipe organ, there is growing activity in the area, and we keep suggesting it might be time for a new chapter out there. How about it, folks?

Meanwhile, after a few days back home in Atlanta, I am off to Florida. I will be performing at the wonderful Wurlitzer at the Grace Church in Sarasota. That’s a Sunday afternoon Manasota chapter meeting. Following that, a Monday will find myself, Mike Kinerk the ATOS Convention Planning Coordinator, along with Cliff Shafer and Vince Mirandi (co-chairs of the upcoming Tampa convention in 2017), involved in convention meetings all day long with various potential venues and management for that gathering.

I will spend Tuesday in Jacksonville with the ATOS Interim Operations Manager Mark Renwick, as we go over much of the new operations re-structuring, including job descriptions, contracts, potential changes in several areas and more that Mark is making his major focus. Much of what Mark is attending to relates directly to initiatives stemming from the ATOS Retreat.

The trip will also include a stop for a performance at the Kirk of Dunedin, undergoing major changes in its longstanding series that dates back more than 40 years. I will be honored to share the bench with Terry Charles, who has been the driving force for all those years. More on that later.

Finally, I will take a few days of personal time and enjoy a Double family reunion. The six boys of Art and Kay Double have not been together since the passing of my Dad some seven years ago. With three of the six living in the greater Tampa Bay area, and my being down there, the other two (one in Chicago and one in Durango, CO) will make the journey for a lot of laughs.

One last note, I just recorded a new two-hour webcast for Theatre Organ Radio.
It will air starting October 5 for one full week. Check the website for times, as they will vary to accommodate our world-wide audience. The reason for the one-year hiatus was simple. We needed studio space and the fine folks at Cox Broadcasting and WSB Radio have been generous to offer us a home. Broadcast engineer Tim Stephens (Atlanta chapter member) makes the job easy, and Theatre Organ Radio programming and music guru Steve Worthington helps put it all together. Our special guest for this return to the web will be Clark Wilson.

I hope the regular listeners to ATOS Theatre Organ Radio will enjoy the return of this show, now named Pipes, Pops, and the Pros Who Make the Music.

Til next time, get to a concert, find us a new member, and support your local efforts to bring the theatre organ to the public!