The San Francisco Fox Theatre was perhaps the greatest of all movie palaces. Never the largest, nor, in a few places, the best detailed, it nonetheless stood unrivaled for its overall blend of size, grace, elegance and what Ben Hall called "gee-whiz opulence." The Fox's Wurlitzer, live or on records, was the first many of us ever encountered. The house lasted a mere 34 years.

Everything that architect Thomas Lamb had learned designing Loew's Midland and Ohio, and much more, went into the Fox. Perhaps sensing he had done all he could in this line, Lamb went over to Oriental models for his subsequent projects. Unashamedly Baroque in almost every aspect, the Fox also anticipated the coming of Deco in such details as light fixtures and the balcony cosmetic room. A minor disappointment was the treatment of the lobby and auditorium ceilings: intricate stencil work replaced the coffering initially proposed.

The last of William Fox's five giant theatres, the Fox was also San Francisco's last major house. More than half again as large as anything else on Market Street, and three long blocks from the hub of the movie house district, the Fox was not always a spectacular money maker, but neither was it, as too often pictured, a white elephant. Nevertheless, by the late 50s, its mighty overhead and shrinking revenues were converging perilously. When neither the city government nor the voters could imagine the big house as a performing arts or convention facility (an idea but half a decade ahead of its time), the Fox was doomed. A memorable benefit show closed the house on February 16, 1963. By late summer it was gone. It was replaced by a charmless office and apartment tower.

The Fox's Wurlitzer, the last of the New York Paramount types, was set up in the usual manner, but with the Solo and Orchestral chambers reversed. The 32' Diaphones lay horizontally above the proscenium. Having missed out on the silent era, the organ enjoyed its heyday in the early 40s under George Wright. Everett Nourse followed Wright and occupied the bench right up to the last night. State politico Frank Lanterman bought the organ and installed it in his La Cañada home. It later became the property of the City of Glendale, and was placed in storage. It was sold to Disney/Buena Vista Pictures and restored before being installed in the El Capitan Theatre in Hollywood. 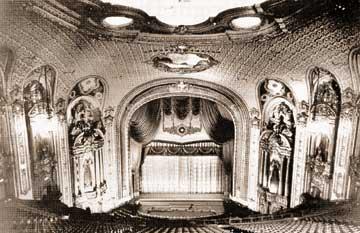 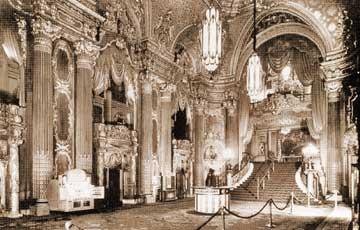