It is with great pleasure that we announce the three finalists selected for this year's Young Theatre Organist Competition!
They will perform on the 3/12 Wurlitzer in Eisenhart Auditorium on July 1, during the Annual Convention.

Jared is 19 years old and lives in Massillon, Ohio. Regularly, he plays at the Canton Palace Theatre on the 3/11 Kilgen Wonder Organ, mostly before movies, and has played in numerous locations, including the Akron Civic Theatre, and the Connor Palace Theatre in Cleveland. Jared has been playing the Classical organ for almost 4 years, and the theatre pipe organ for 3 years. However, he has been studying piano for 12 years. He became interested in the pipe organ after attending a silent film “Gold Rush” by Charlie Chaplin. Jared is coached by Mark Thewes for his classical organ studying, and by Jelani Eddington for theatre organ, with help from Jay Spencer, another theatre organist from Canton. Jared has attended the 2016 ATOS Annual Convention in Cleveland, Ohio as a winner of the George Wright Memorial Fellowship, and had helped tuned the Wurlitzer at the Akron Civic Theatre before the convention. He also attends the annual ATOS Summer Youth Adventure, for further instruction to refine his technique and skill.

Outside of the theatre organ world, Jared is the staff organist for Faith Lutheran Church in Massillon, where he has been organist since November of 2018. Jared enjoys creating music, whether it be arrangements, or compositions created digitally. Jared graduated from Jackson High School in May of 2018 and had attended the Jackson School of the Arts, a school with a curriculum centered around any and all art forms, including choir, band, dance, and theatre. He is “thrilled to be a part of the competition, and cannot wait to perform!”

Richie has had a lifelong interest in the theatre organ since age 1, when his grandparents began taking him to visit the Roaring 20’s Pizza and Pipes (Ellenton, FL). This continued each year up until its closure in 2010. At age 4, he was given CD’s of Bill Vlasak and Dwight Thomas, which he burned into his head, now triggering various nostalgic memories.

Richard began playing the piano by ear at age 6, interested in only perusing organ, later obtaining his first spinet (Kimball) when he was 9 years old. He took up percussion for school, eventually participating in all three concert bands, and put in charge as head “section leader” for the percussion section of the elite band (with a preference for Timpani). Richard also enjoys arranging for ensembles. He has arranged for big band ensembles and marching band, as well as scored several short films.

Richard now studies organ privately with Chad Baker of Capital University (Bexley, Ohio), and has recently come around to a deep and satisfying appreciation for the classical pipe organ.

Richard is currently the organist and bell choir director at Saint Andrew Christian Church (Disciples of Christ) in Dublin, Ohio, and the Synth/Audio tech/staff for the Worthington Kilbourne High School Marching Band (Worthington, Ohio). In his free time, Richie likes goofing off and spending time with his nieces and nephews.

At 21 years old, Aaron has recently completed his fourth and final year at the University of Glasgow, soon to be graduating with a Master of Arts degree in Music. Alongside his academic studies, Aaron has been building up an admirable network as a freelance organist, pianist and conductor.

Affection for the (theatre) organ began in Aaron’s early teenage years after a family trip to the well-known UK seaside resort of Blackpool, where, on his first visit to the famous Tower Ballroom, fell instantly in love with the sight and sounds of the mighty Wurlitzer and consequently devoted his teenage years to learning organ technique, having already played piano. He was soon given a position in a local church, and at the same time, discovered the local Pollokshaws Wurlitzer on the outskirts of Glasgow, where to this day, Aaron has remained a devoted committee member of the Scottish Cinema Organ Trust.

In 2017, Aaron won the senior trophy of ATOS London & South of England Chapter’s Young Theatre Organist of the Year competition and has subsequently enjoyed accepting invitations to perform in young organist showcases throughout the UK. His versatility across theatre and ‘straight’ organs, led to an invite in 2018 to play at Kelvingrove Art Gallery and Museum, where he is frequently asked back to provide music for their daily recital series.

Although largely self-taught, Aaron is very grateful for his recent mentoring from one of the UK’s finest musicians and theatre organists, Michael Wooldridge, and has also enjoyed learning about organ building and preservation from various specialists in the field too. Aaron hopes to be able to devote more time over the next year or so in building a flourishing career for himself, as well as experimenting with new ways to expose the theatre organ to new audiences. 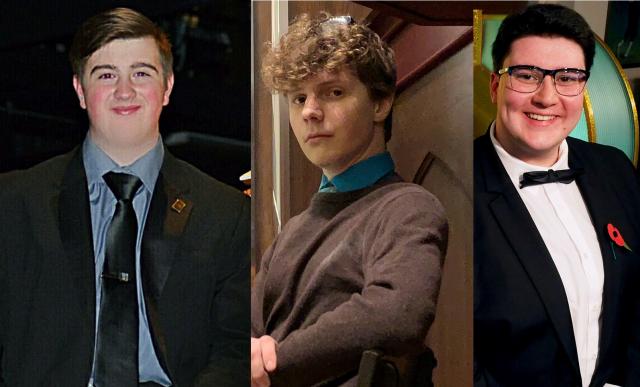