The American Theatre Organ Society will be holding its annual Young Theatre Organist Competition this coming July 5 in Cleveland. The initial competition has yielded three finalists.
They are:
Seamus Gethicker, Richie Gregory and Luke Staisiunas.

Please plan on attending this event to support our extraordinary young talent.

Seamus Gethicker is a junior at Morse High School in Bath, Maine. Seamus’ interest in pipe
organs began at age 9, when he attended a Magic of Christmas concert at Merrill Auditorium in
Portland, Maine and first witnessed the mighty Kotzschmar Organ played by Ray Cornils. It was
love at first sight.
Seamus is currently honored to be a student of Ray Cornils for classical organ and Jonathan
Ortloff for theatre organ. He is an active member of the Pine Tree Chapter and the Eastern
Massachusetts Chapter of the American Theater Organ Society, and he is also a docent for the
Friends of the Kotzschmar Organ. Seamus plays trombone in his school’s concert band, and is
a member of the chorus.
Seamus was awarded a scholarship through the Young Organist Collaborative based in
Portsmouth, New Hampshire for the years 2013-2015. He has also been honored with a Penn
Brown Scholarship from the same group for 2016.
Outside of the organ, Seamus also enjoys theatre lighting design where he designs and runs
the lights for his school's stage crew throughout the year.

Richie Gregory’s involvement in music is very deep. He is a member of all 7 band programs in school and he does a lot of composing. He has been exposed to, and in love with the theater pipe organ ever since age one. Every year, his family would take him to visit the "Roaring 20's Pizza and Pipes" in Ellenton, Florida. He received his first theatre organ CD in either kindergarten or pre-school, which was "An Hour With Bill" by Bill Vlasak. He always wanted to learn organ. His grandmother attempted to teach him piano when he was in kindergarten, but she was unsuccessful. Richie instead began playing by ear and took to the organ around age 9 or 10, and just recently began reading music. He wishes that he had begun musical instruction earlier but his family did not take his great musical interest serious for some time.
He has only played a theater pipe organ twice (as of March, 2016). Living in central Ohio, instrument availability is very tight and limited, as well as difficult to access since he cannot yet drive. None the less, he is determined to eventually become a preforming theater organist. Richie hopes to not only revive its reputation and use, but also bring the happiness and excitement that Bill Vlasak and Dwight Thomas's playing gave him to others, giving them goosebumps. He loves to show off this grand instrument, "filling souls with the bleeding of the roaring sound from the organ". At the bench of this instrument is where Richie is truly happy in life, filled with passion and usefulness.
Richie would like to acknowledge the generosity of the Manasota Chapter of the American Theatre Organ Society and Grace Church with gratefulness for arranging access to their instrument in Florida, without which, he would not be able to be in the YTOC.

Luke Staisiunas has always had an interest in music, specifically the organ, after he was exposed to the music program at St. James Episcopal in Chicago, Illinois at a very young age. At the age of 5, he began piano lessons and developed a serious interest in the organ shortly after. Bored with the piano, his parents finally gave in and allowed him to buy a small Thomas spinet organ, which gradually gave way for bigger and better instruments. He had four years of classical organ lessons at Mercersburg Academy, where he attended high school, under Jim Brinson, the school’s organist. His theatre organ playing stems mostly from instinct, as well as the instructors and other students at the Summer Youth Adventure which he has gone to since 2011. He is currently pursuing a bachelor’s degree in Organ Technology at the University of Oklahoma, which covers many aspects of organ building in addition to both classical organ repertoire, and theatre organ playing. He has played at numerous events organized by local chapters, and has made appearances as part of the TOSDV Holiday Program, a solo concert for the Cumberland Valley chapter, played during the band breaks at the Ballroom’s 2014 Holiday Ball on their unique 3/14 United States Pipe Organ company instrument. He also appeared for the Garden State Theatre Organ Society for the long-awaited dedication of the Wurlitzer at the Brook Arts Center in Bound Brook, NJ 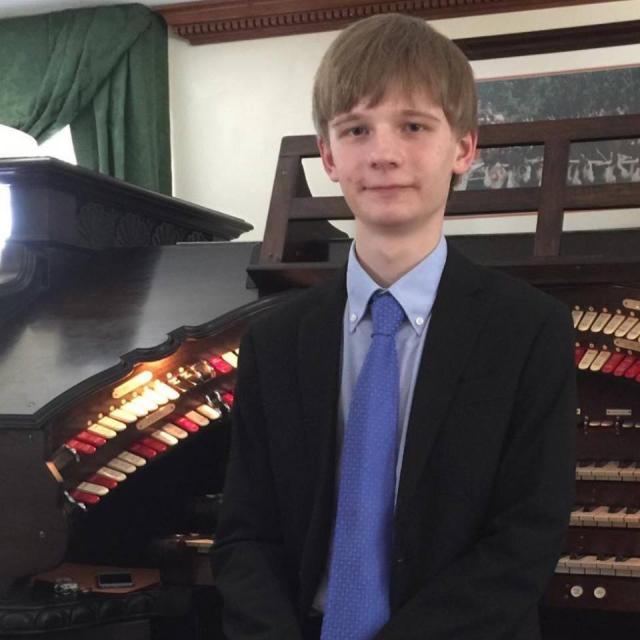