Anderson—a student of the late Lee Erwin (who became famous for scoring and performing many original scores of silent films with theatre pipe organ accompaniment)—has scored and performed many silent film scores on organ in the New York area over the last 10 years and recorded new scores for four DVD releases through reelclassicdvd.com and Image Entertainment. Bernie further studied organ with famed Radio City Music Hall organist Ashley Miller from 1991 to 1997.
In 2001, Anderson was the organist for the New Jersey edition of the Library of Congress' American Movie Classics Film Preservation Tour, in which he performed his own scores for Laurel and Hardy's short "Big Business," 1903's "Great Train Robbery" and Harold Lloyd's "Safety Last." Bernie served as Head Staff Organist and curator at the Union County Arts Center (formerly known as the Rahway Theatre) for 16 years and was a staff organist for the Lafayette Theatre in Suffern NY on the 2/10 Ben Hall Memorial Wurlitzer for 13 years playing intermission before the first-run movies.
In July 2003, Bernie had the pleasure of being the premiere organist for NYC AGO's Pipe Organ Encounter (POE) which was held at Radio City Music Hall on the Music Hall's 4/58 Wurlitzer. The event's purpose was to expose classical organ students to the world of theatre organ. February 2005, in a concert with Dave Kopp, Bernie played the first public NYTOS concert at Radio City Music Hall since 1979. Anderson has played concerts and silents at Dickinson High School, Long Island University (Brooklyn Paramount), Capitolfest - Capitol Theatre, Rome, NY and Colonial Theatre, Phoenixville, PA.
In 1996, Bernie met Tony award wining orchestrator Douglas Besterman and started to work as his orchestration assistant on such Broadway shows as "Big," "King David," "The Radio City Music Hall Christmas Spectacular," "Fosse" and "Seussical the Musical" (in which he also served as the music production assistant to the conductor on its Broadway run). Bernie studied orchestration with Danny Troob, orchestrator for the Disney animated films such as "Beauty and The Beast," "Aladdin" and "Enchanted."
In 2005, Bernie wrote the orchestrations for a new musical, "The Girl in the Frame," which was presented at Goodspeed Opera House in Connecticut and published by Theatrical Rights Worldwide in 2007. Bernie recently finished orchestrations for another new musical called "I See London, I See France..." which premiered at the New York Musical Theatre Festival in Sept of 2007.
At NYU, Bernie wrote music for the musical "Washington Buzz" as his thesis project and was a member of the BMI Lehman Engel Musical Theatre Workshop from 2002-2006 where he wrote the music for a new show called "Slapstick".
In May 2000, Bernie teamed up with Broadway composer William Finn to write two new songs based on Ogden Nash poems commissioned by The New Yorker Magazine for their 75 years of New Yorker Humor festival, "I Say It's Spinache!" at the Townhall Theatre in New York City. The show—directed by Wendy Wasserstein—starred Alec Baldwin, Swoozie Kurtz, Buck Henry and Chris Durang with special guest, Broadway performer Debbie Shapiro-Gravitte and William Finn with piano accompaniment by Bernie Anderson. Bernie is the recipient of the 2000 ASCAP Frederick Loewe Award presented to him by Kitty Carlisle and is a member of ASCAP and AFM Local 802 (NY).
Bernie Anderson, Jr.
Silent films
Telephone: 908-881-1636
E-mail: roxymusic [at] comcast.net
Website: Roxy Silent Films
ATOS Artists' pages are provided as a courtesy to the artist and do not imply an endorsement by the American Theatre Organ Society 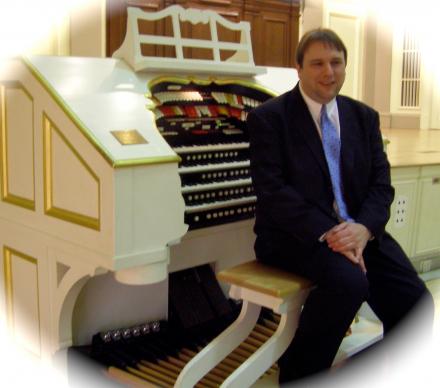