Steven Ball occupies a rather unique place in the musical world of the organ. In addition to being a Fulbright Scholar, he is part of a small number of artists proficient in the genre of the theater organ ever to have achieved a doctoral degree in music, and the first to have ever done so with a degree in organ performance. Widely recognized for his scholarship both with classical improvisation as well as the art of silent film composition and accompaniment, he has traveled and performed extensively in both the United States and abroad including concerts in The Netherlands, Germany, Belgium, France, Portugal, Ireland, England and Switzerland. Some important firsts include the world premiere of the first concerto for theater organ and orchestra ("Once Upon a Castle" 2003 by Michael Daugherty) and the first silent film accompanied by a carillon.

Originally from a small farm near Wright Michigan, Dr. Ball began playing the organ at a very young age. By the time he was 6, he was both studying piano and attempting to complete a single stop pipe organ which his father and he had begun engineering together in the basement of their family home. He began accompanying church services on a regular basis by the age of 9, and started formal organ studies not long after with Dr. John Hammersma of Calvin College. By the age of 16 he was accepted as an undergraduate in the studio of Dr. Marilyn Mason of the University of Michigan. His undergraduate studies in organ performance were followed by several years of study abroad which included work at l'Institute de Touraine in Tours (France), the University of Utrecht and Royal Dutch Carillon School of Amersfoort (The Netherlands) as well as the Royal Carillon School of Mechelen (Belgium). He was awarded a Fulbright Scholarship by the United States Government in 2002.

Steven Ball now is Organist and Director of Outreach for the world’s largest pipe organ located at Boardwalk Hall in Atlantic City, NJ. Previous to this appointment, he was University Carillonneur at the University of Michigan as well as a member of the Faculty of the Organ Department in addition to being Director of the Stearns Collection of Musical Instruments.

His work at Historic Boardwalk Hall now focuses on returning famous the Midmer-Losh pipe organ--famously the largest musical instrument on earth--to fully operational, a situation which hasn't been realized since the Great Atlantic Hurricane of 1944. The 10 year, 16 million dollar restoration of the instrument is being led by the Historic Organ Restoration Committee (a 501c3 nonprofit corporation). Restoration efforts have recently returned approximately 25% of the instrument to operation, and it can be now heard increasingly for shows in the building as well as free daily noon recitals recitals Monday-Friday, May-October. More information about this can be found by visiting the website www.BoardwalkHall.com 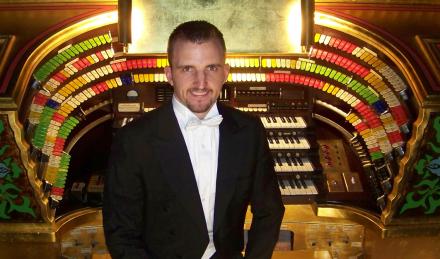