List of Theatre Organ artists. This of course is not a comprehensive list, but includes artists who are regularly performing on the theatre organ worldwide.

Zach Frame is the resident organist at Organ Piper Pizza, where he can heard almost nightly. Zach owes his interest in the theater pipe organ to his parents, and also to a visit to Organ Piper...

Simon was born in Halifax, UK and showed a keen interest in music from an early age.

He began learning to play the piano accordion at age six and continued with that instrument for eleven...

David Gray was born in Glasgow, Scotland in 1990 and first showed an interest in music at the age of four. He first taught himself how to play the piano by ear, and his first lessons followed a... 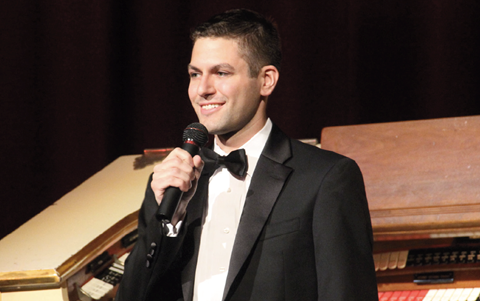 Born in 1987, Mark Herman is one of America’s busiest young theatre organists,...

Richard Hills is one of the very few musicians truly to have bridged and mastered the divide between the world of the classical organ and that of the theatre organ. Having commenced classical organ studies under William Whitehead at Rochester Cathedral, he became Organ Scholar at Exeter College Oxford, studying with David Sanger. Further organ scholarships followed at Portsmouth Cathedral, where he studied with Rosemary Field and at Westminster Abbey.

Dennis James has dedicated his professional career to the theatrical traditions of organ performance and furthering public interest in the pipe organ. From the time he began performing concerts...

Blackpool Tower’s Ballroom is home to what must be the most famous and most played Wurlitzer in the world and Phil Kelsall has amazingly now completed 36 years at the Tower, having been appointed in 1975, initially as organist in the Tower Circus band with occasional appearances in the Ballroom.

In 1977 Ernest Broadbent the then Tower organist, retired
through ill-health and Phil was the obvious choice as the new principal resident organist, a position he has held ever since.

Lance Luce is an internationally acclaimed theatre organist. He has played hundreds of concerts all over the United States, Canada, England and Australia. His concerts are praised for appealing to...

John McCall was instrumental in securing the 3/11 Möller organ for the Rylander Theatre in Americus, Ga. where he serves as house organist. He has played for numerous productions of the Sumter...